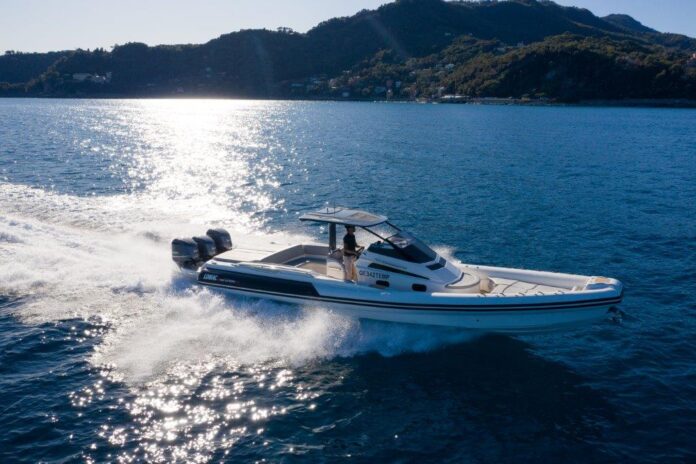 “The Genoa Boat Show is unmissable because it is the leading event in the Mediterranean, which is our main market. And this year it has even more appeal for exhibitors and visitors after the cancellation of other top shows. For our company, 2020 is a special year because it marks our 60th year in business, an anniversary also celebrated by the famous boat show in Liguria.”

These were the words of Fabrizio Lo Manto, who manages the shipyard with his cousin Paolo, in the run up to the Genoa Boat Show.

Lomac, which in recent months has restyled its brand image, involving a complete redesign of the logo and website, has also developed a special edition of the Milan-based Shipyard’s best-selling Adrenalina 10.5 and GranTurismo 10.5 models, which will be on show at the event alongside two GranTurismo 12.0 units featuring different Yamaha and Mercury engine configurations.

Adrenalina 10.5 Limited Edition 60th Anniversary, presented for the first time at an international boat show, is a new take on this cult model and the range’s top performing flagship, which stands out for its excellent handling. Fitted with two 300 hp Mercury outboard motors, it has a top speed of over 50 knots.

Another surprising debut is GranTurismo 10.5 Limited Edition 60th Anniversary, which revisits a sporty model with families in mind, offering high standards of safety and comfort on board. The unit on show at Genoa will have a specially redesigned hull to mount two XTO Yamaha engines rated 375 hp each, delivering spectacular performance that is unrivaled in the RIB segment.

Both models designed by Federico Fiorentino feature custom details by d-factory and upholstery in real leather specially treated to resist salt water and direct sunlight. The stitching and colours of the upholstery are another distinctive element, featuring exclusive designs and nuances created to celebrate Lomac’s anniversary with a new and highly appealing look.

These two Lomac novelties will be joined by Granturismo 12.00 (overall length 11.7 meters, width 3.54 meters), featuring an elegant t-top custom made by d-factoryitalia and three Yamaha 300 hp engines, a Granturismo 12.00 with a pair of 450 hp Mercury outboard motors