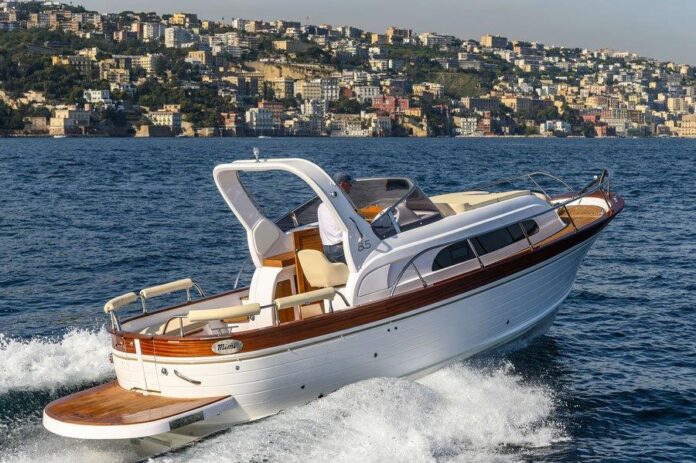 Since few weeks the skiffs by Gozzi Mimì will be available for sale in the Lake Maggiore area, thanks to the agreement signed between Domenico Senese, owner of the Neapolitan shipyard, and Massimo Levorato, from Piccaluga shipyard, located in the North of Italy.

The first unit sold as a result of the partnership has been a Libeccio 8.5 Cabin – a successful day cruiser with a solid mahogany sun deck and fiberglass hull, equipped with a spacious double cabin and external dinette –, while a second unit will be delivered within days.

This past October, at the Genoa Boat Show, Gozzi Mimì launched its new models designed by Valerio Rivellini. The same boats were then on display in Bologna and these two boat shows has been the starting point for the new partnership.

Domenico Senese, in fact, said that: “During the Genoa Boat Show we received a number of visits and an overall response that exceeded our expectations. Some of the negotiations we initiated in Genoa were then signed at the Bologna Motor Show. The dealership agreement with Piccaluga is an example.

We are particularly satisfied with this new collaboration because Lake Maggiore, as well as all the internal basins of Northern Italy, represent a market so far almost unexplored, although potentially very interesting and certainly suitable for our boats “.

Cantiere Nautico F.lli Piccaluga is a well-known reality in the area, where it has been operating since 1964, and over the years it has become an important reference point for the many foreign boat owners who frequently visit the lake. The collaboration between this Company and Gozzi Mimì confirms that this renewed attraction towards skiffs is a growing trend. It is not a coincidence that the Neapolitan shipyard this year only recorded a 30% increase in turnover.