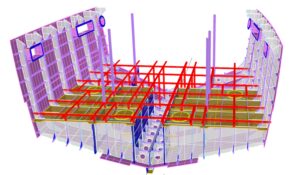 “Substance matters more than form!” as our parents, and long before them our grandparents, used to say.

Today, 20 years after the start of the new millennium, it sometimes seems to us that this popular saying has been overturned and perhaps, looking at television, advertising and the various fashions that followed day after day, it seems that form has triumphed over substance. How many people stop to look at the styling of a dress, a car, a design object or a boat. But they don’t see the performance, the functional characteristics, the technical specifications that make the product a unique example that is better than one that seems similar.

The true meaning of “design”

Design is not just the image that appears to the end user, the word itself intrinsically incorporates the idea of “planning”, “creating”, a word much closer to engineering than to the common belief in just stylist and form.

So a marine project is made up of “form” but also the technology that makes up the true heart of the vessel.

Form and function in a boat are indissolubly linked and create floating objects that are unique and almost perfect, delicate balances, harmonious proportions and refined details. When we start on a marine project we must never forget that we are planning and designing an object that must first of all sail.

It’s not enough to be an architect, a designer or an engineer, you need to be more than this. You need to be the union of these three professions. This is the case of the Ligurian nautical/naval studio Marine Design, founded by engineer Umberto Tagliavi.

He has the sea in his heart and has always been involved in all-round design, both in the yachting sector and in technical and work boats. His passion for yachting was born on the “Riviera di Levante of the province of Genoa, when yachting was the real “traffic” of the village of Santa Margherita Ligure. The quays of the port in summer were full of boats moored in several lines and sailed by as if they were on show along the coastline”.

Passion and interest since he was a child and a boy were what drove Tagliavini into his professional career. Much of yachting has its roots on the Ligurian coast, it’s a territory that has seen the yachting sector come into being. In this fertile land grew the designer who today manages to combine technique and engineering (discipline is more in line with his education) together with the actual project linked to the stylist and the form of the yacht.

In his past are jobs and projects he has carried out for many yards and leading figures of the yachting world: Bruno Abbate, Tullio Abbate, Colombo, Piantoni, Otam, Apreamare, Numarine etc. Small, medium and large boats: Umberto Tagliavini has designed them all. Today, as yachts get increasingly gigantic, the balance between pure stylistic design and engineering is increasingly complex.

Many aspects of the design influence the waterlines, the balancing of weights, the design of the stabilising fins, the engine, the hull and so on. Form and function are always in continuous evolution. “I have a bad character, I always try to dominate,” says Umbero Tagliavini, “but I do it for good reason. My aim is always to produce the perfect hull to make the boat go well.”

Marine Design consists of a tightly knit team backed by several contributors who are by now regulars, colleagues and friends of Tagliavini, for example Aldo Scorzoni (with whom he has worked for 28 years), his friend the engineer Francesco Samarelli who, for reasons of distance, follows construction in the field, and other younger ones such as Clara Moltedo with whom he has worked for more than five years. The aim of his work is always to seek out creativity, innovation and intelligent engineering solutions. Interesting collaboration has been going on since 1986 with Otam, a yard in Sestri Levante, another beautiful town of the Genoese Riviera del Levante. 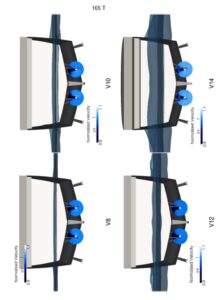 “Although much has already been invented, I think it is always possible to find the ideal solution for a hull. It depends on the kind of boat, how it is used, what engines it has, what transmission has been chosen. Dynamic flow software helps, but alone is not enough.”

With Otam an interesting concept was created, the OTAM 115. This is a 33 m yacht, a superyacht, which stems from the desire of the Italian yard to extend its range developing the typical characteristics it never wants to renounce: an essential approach, sportiness and an iconic, recognisable design. At the heart of the project is the absolute optimisation of spaces and extreme attention to privacy, with the creation of passages for the staff designed to guarantee the minimum interaction with guests.

In order to create a large liveable area that could integrate the cockpit with the main saloon, one of the two doors giving access to the main deck is a swing door that disappears into the interior when open, while the other sinks down between the bulkheads separating the engine room from the crew area. In this way guests in the cockpit can interact without obstacles with those in the after section of the main saloon.

The bridge possesses OTAM DNA, as it ensures Broadview guaranteeing safe handling in all sea conditions and during manoeuvres. Forward is a third dining area and a large sunbed. Maximum efficiency and safety in the handling of the technical side is guaranteed by direct and immediate access for the crew from its quarters to the engine room. 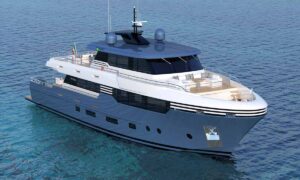 A second example of a project handled by the Marine Design studio, at the engineering level but not only this, is a superyacht built by the ITALIAN VESSELS yard (Porto di Termoli).

This is a classic example of an excellent result of teamwork between the design purely of the form linked to technique and engineering.

The design of the interiors and exteriors saw the participation of the Tommaso Spadolini yacht design studio. The studio worked in a very harmonious and interesting way on both the interior and exterior design. The design was very distinctive and unique, reinterpreting the classic model of the superyacht but giving something extra to the design, a formal gesture that was very stimulating and typical of the able hand of Tommaso.

The study of the pure naval architecture was carried out by Umberto Tagliavini and his Marine Design studio. The vessel is a displacement yacht built entirely in steel and aluminium. Steel was used for the hull and light alloys for the superstructure. The vessel reflected the desire of the Italian Vessels yard to launch its brand with a project in steel and aluminium with great seaworthiness, offering something beyond the classic fibreglass motor yachts of the same size.

From the study to the project

When the study of the hull lines was finished, to arrive at the definitive form they underwent checks with computerised high engineering calculation programs. Then the structures were studied and designed and slowly the part below the waterline and then the study of the entire vessel was brought to a conclusion.

Particular attention in the study of the shape of the hull was paid to the bulb, which in fact is very small and has a particular shape with many 3-D curves, which led Tagliavini to study not only its functionality but also the most intelligent method for producing it correctly and with ease.

Then the team passed to all the technical/structural details such as the reinforcement for the stabilising fins, the bow thruster, the rudder mole or bracket and any other technical solutions required by the yard during the build phase.

The project exists in two versions: Wide Space and Enjoy Yacht. The hull is the same in both versions, the former has a traditional superyacht profile while the second is a supply version that recalls the Explorer yachts with the superstructure further astern and the cockpit with larger open spaces, ideal for housing tenders and water toys. The yacht is designed to tackle any sea and weather conditions without too much trouble.

The two versions share about 70% of the superstructure. Both models have four comfortable cabins with bathroom on the lower deck and a well lit master suite forward of the main deck, complete with divan and walk-in wardrobe. An unusual solution on a yacht of this size is the presence, in addition to the main saloon, other sky lounge of about 16 m² aft of the helm on the bridge deck.

These are compact superyachts of less than 29 m overall and about 210GT, but they are based on the principles of large yachts, for example they have wing stations to improve visibility for and aft during manoeuvres. Both have two 650 hp MAN engines, giving a top speed of 30 kn and a cruising speed of 10.

Another unusual feature on yachts of this size is that they can carry 25,000 L of fuel for a range of more than 3000 nautical miles at cruising speed. As with all yards, the build calendar of the Wide Space has suffered slight delays because of Covid 19, but the launch is expected this autumn.