Monday’s racing began well enough for Luna Rossa – at least until the second upwind leg, when they blew it all away by opting for the wrong side. In the next race, the Italians again began well, helped by the New Zealanders dropping off their foils, but the wind was in a fickle mood and towards the end of the second upwind leg it was Luna Rossa’s turn to hit a patch of calm and flop down into the water.

They blew their four minute lead and watched the New Zealanders fly off to win. The day ended with the score at 5-3.

The difficult races of the 4th day 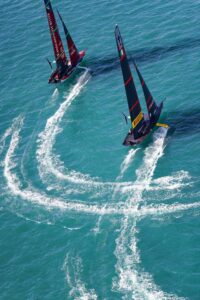 The seventh race on Monday began with a false start: both crews crossed the line early and had to sail back and start again. Luna Rossa won the start this time and gained a lead of around 80 metres, fighting off the New Zealanders to round the top mark eight seconds ahead. New Zealand looked fast on the downwind leg, but Luna Rossa held them off and rounded the downwind gate with a lead of 10 seconds.

The second race of the day, the eighth in the final, Luna Rossa had an excellent start and led by 200 metres as the boats crossed for the first time on the upwind leg. They remained in control for the first half of the downwind leg when New Zealand, trying hard to catch them, fluffed a gybe and down they came off their foils.

By the time they’d struggled up again Luna Rossa was more than two kilometres away. They must have imagined they had the race in their pockets when, towards the end of the following upwind leg, Luna Rossa hit a patch of calm and the world ended.

Wallowing down off their foils they managed to round the mark in displacement still with a sizeable four minute lead, but the New Zealanders were smelling blood and Luna Rossa took four long minutes to pick themselves up again.

It was all over. New Zealand pulled away and crossed the finish three minutes 55 seconds ahead, taking the overall score to 5-3 and leaving the Italians with a long uphill road.