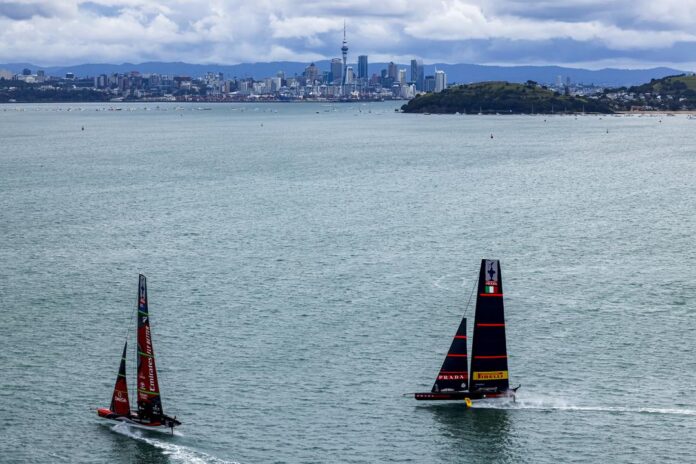 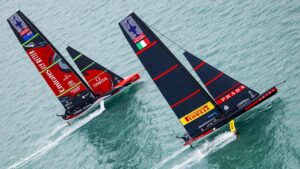 There were a good 14 knots of wind for the start of racing on Tuesday and the opening race, the ninth in the series, saw the two crews closely matched. New Zealand undoubtedly had a speed advantage, but the Italians used all their tactical skills to keep up and the lead changed hands several times.

Unfortunately for Luna Rossa, a lull in the wind on the final upwind leg lost them the lead and the New Zealanders overtook and led right through to the finish. The second race of the day was cancelled owing to light, shifting wind, leaving the final score 6-3 in New Zealand’s favour.

The race started with the two boats level, and though the New Zealanders were faster Luna Rossa managed to keep to the right of them and force them out towards the left. A fierce tacking duel followed, Luna Rossa took the lead and New Zealand had to tack out of the dirty air. But they weren’t giving up and in the tussle at the first gate Luna Rossa led by just one second.

The Italians opted for the right hand side after the gate, but New Zealand picked up more wind on the left and as the boats crossed for the first time led by 20 metres. The lead changed hands again as Luna Rossa found more pressure on the left, pushing New Zealand over the layline and rounding the downwind mark eight seconds ahead.

At the start of the second upwind leg Luna Rossa built up a 200 metre lead, but the New Zealanders were almost four knots faster and pulled level. Again, tactical skill came to Luna Rossa’s rescue and they pushed the New Zealanders out to the left hand boundary, tacked ahead of them and rounded the top mark nine seconds ahead.

On the downwind leg New Zealand had the speed advantage again, though the Italians managed to control, but by the gate their lead was down to three seconds. Luna Rossa led for the first half of the upwind leg until they ran into a patch of light air and were 18 seconds behind at the mark. From then it was plain sailing for New Zealand, who crossed the finish half a minute ahead.

With the following race cancelled, New Zealand only needs one win tomorrow to hold on to the 2021 America’s Cup.